On behalf of Rich Moccia, University of Guelph: 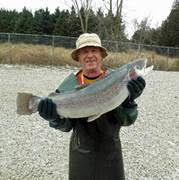 It is with much sadness that I pass on the news of Neil MacBeth’s death on June 25, 2019, after a short, but incredibly courageous battle with ALS.  Neil was first hired by the University of Guelph in 1989 as a research assistant with our fish genetics group in the Animal and Poultry Science Department.  He moved to the Alma Aquaculture Research Station as our quarantine technician in 1990, and was then appointed to a permanent position as a Research Assistant for Alma, where he worked until he took leave last fall to try and fight this terrible disease.  Along with the rest of the Alma team, Neil provided essential support to all of our station’s operations, as well as providing assistance and guidance to numerous researchers and hundreds of experiments over the years.  In addition to those duties, Neil lived on the Alma property for nearly 30 years, and provided security and emergency response.

Neil was a constantly happy and outgoing individual who soldiered on in spite of any challenge that came his way, including the untimely death of his son Rhys in 2014.  He always had a smile and a laugh no matter the situation.  Neil enjoyed the outdoors, scotch whisky (of course!), and was an avid camper and kayaker, and a scuba diver in his younger years. He enriched his Scottish roots by learning to play the bagpipes, and was an accomplished piper for many years with the Grand Celtic Pipe Band.

He is survived by his partner, Heather Taylor, and children, Renata Post(Gareth), Conal MacBeth, Reilly Taylor-MacBeth, and grandchildren Logan Post and Payton Post.  He is predeceased by his son Rhys MacBeth.

A Celebration of Life is being planned for Saturday, August 24th, 1-5 pm., at the Fergus Legion, Fergus, Ontario.

Charitable donations can be made to the ALS Society of Canada at:
https://secure.e2rm.com/registrant/DonationPage.aspx?eventid=214165&langpref=en-CA&utm_campaign=website&utm_source=home&utm_medium=button