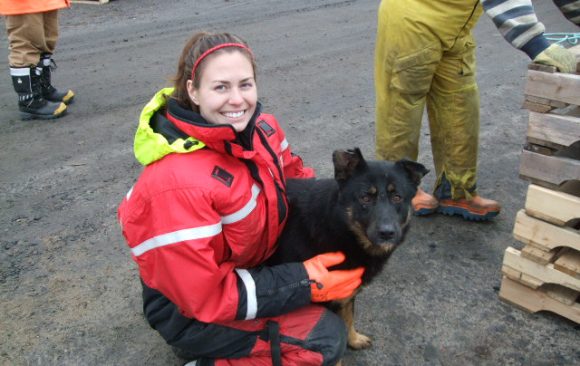 “I hate to admit it, but I didn’t even know there was a fish farm in Parry Sound. I grew up here and spent lots of time on the water, we boated past the site many times, but I never realized it was a fish farm.”

“The farm is so unobtrusive, it just blends into the shoreline. It wasn’t until I left and went to university that I learned there was a farm here.” Now 11 years into her career at Aquacage Fisheries in Parry Sound, Kana Upton still laughs as she recalls her start with the company.

In her last semester of the University of Guelph’s Marine and Freshwater Biology program, Kana found herself taking a fish and crustacean nutrition class.

“It was a fluke I was in the class; it was last semester. To my surprise, we were told a fish farmer from Parry Sound was coming speak with the class. When I learned it was in Parry Sound, I decided to reach out to the farmer, who turned out to be Gord Cole. I had a short meeting with Gord, and he told me to call him when I finished school.”

]Despite plans for contract biologist work related to the gulf oil spill, Kana was intrigued by the fish farm in her hometown. “I felt like I should do some research, so I started looking into aquaculture and the farms in Ontario. You hear a lot of criticism and media against fish farms, and I needed to know the reality. Morally, for myself I needed to know this was right.”

After graduation, Kana took Gord up on his offer and met up for a farm tour.  “The biologist and the manager [on the farm] were looking for help and offered to put me on part-time. After two weeks it was full time.”

Starting out at Aquacage Kana learned the operation from the ground up, performing farm tasks but also learning how to use the ROV to observe feeding, inspect nets and learning a lot about fish behaviour. After two months the biologist at Aquacage left for other opportunities and suggested Kana as his replacement. 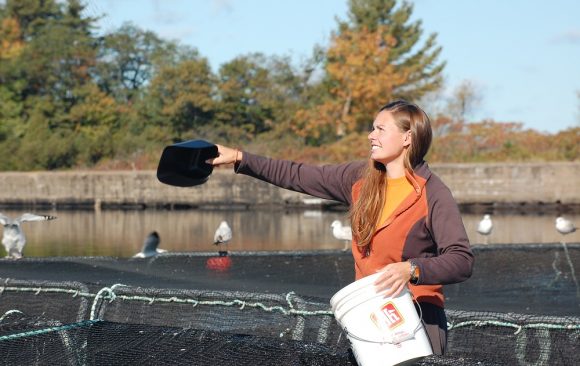 “When they asked me to be the biologist, I thought they were joking. I had little experience, but Gord took a chance on me, and I ran with it.”

Within 6 months the manager departed, and Kana found herself as both farm biologist and farm manager. On becoming manager Kana took the lead and learned about the farm computer programs, kept good records and practices, worked on certifications, and kept the farm running day to day.

“At first it was intimidating running the staff of 15 people, but you earn their respect with hard work. I’m always willing to get my hands dirty and the mix of white-collar and blue-collar jobs is very appealing.”

Eleven years later and Kana still loves the job: “I don’t ever think about leaving Aquacage. I can’t think of another place with the variety of jobs that is both enjoyable and rewarding. Big picture we are doing a good thing for the world. We are providing millions of meals, providing jobs in Parry Sound, and removing pressure from wild stocks.”

Going forward Kana’s focus is to keep the farm moving forward year after year with new technology and better practices. “Each year we get more efficient and improve our operation. I love making the operation better and working smarter, not harder. It means everything to be able to live and work in my hometown, with my family nearby.”